Exactly what happened sometime after ten o’clock on the Sunday night of June 12, 1994 is still disputed, but most likely a single male came through the back entrance of Nicole Brown Simpson’s condominium on Bundy Drive in the prestigious Brentwood area of Los Angeles. In a small, nearly enclosed area near the front gate, the man brutally slashed Nicole, almost severing her neck from her body. Then he struggled with and repeatedly–about thirty times–stabbed Ronald Goldman. Ronald Goldman was a twenty-five-year-old acquaintance of Nicole’s, who had come to her condominium to return a pair of sunglasses.

Just after midnight, Nicole’s howling dog, with blood on its belly and legs, attracted the attention of a neighbor, who then discovered the two bodies.

Nicole Brown Simpson’s ex-husband, former football great and media personality O. J. Simpson, meanwhile, was aboard American Airlines flight #668 to Chicago. Simpson had taken off from Los Angeles at 11:45 after receiving a ride to the airport in a limousine driven by Allan Park, an employee of the Town and Country Limousine Company. The limousine had left the Simpson estate on Rockingham Avenue about half an hour late, after Park called to report at 10:25 that no one answered his ring at the door. Park observed a man he assumed to be Simpson enter his house at 10:56.

Los Angeles police questioned Simpson for about a half hour that day. They asked Simpson a number of questions about the deep cut on his right hand. Simpson initially claimed not to know the source of the cut. Later in the interview he suggested the hand was cut when he reached into his Bronco on the night of the murders, then reopened the cut when he broke a glass in his Chicago hotel room after being informed of Nicole’s murder.
Eventually, however, police accumulated enough evidence indicating Simpson’s guilt in the murders that they sought and obtained a warrant for his arrest. Under an agreement worked out with Simpson’s attorney, Robert Shapiro, Simpson was to turn himself in at police headquarters by 10:00 on the morning of June 17, the day following Nicole’s funeral. When Simpson didn’t show by the agreed upon time, police told Shapiro that they would be driving to his Brentwood home to pick him up. Sometime after one o’clock, four officers knocked on Simpson’s front door. Soon they and Shapiro discovered that Simpson had disappeared—off, it turned out, on perhaps the most famous ride in American history.

Simpson left behind a letter. Addressed to « To whom it may concern, » it had all the markings of a suicide letter. It ended: « Don’t feel sorry for me. I’ve had a great life, great friends. Please think of the real O. J. and not this lost person. Thanks for making my life special. I hope I helped yours. Peace and love, O. J. » Around 6:20 a motorist in Orange County saw Simpson riding in the white Bronco of his friend, A. C. Cowlings, and notified police. Soon a dozen police cars, news helicopters, and some curious members of the public were following in pursuit of the Bronco. The slow-motion chase would finally end with Simpson’s arrest in his own driveway. After making the arrest, police discovered $8,750 in cash, a false beard and mustache, a loaded gun, and a passport in Cowlings’ vehicle.

On July 22, 1994, Simpson answered the question « How do you plead? » at his arraignment with « Absolutely one hundred percent not guilty, Your Honor. »

The opening day of trial–Tuesday, January 24, 1995– finally came. Under drizzling skies, reporters and camera person converged for what writer Dominick Dunne called « the Super Bowl of murder trials. » Judge Lance Ito in his opening remarks told those assembled in the courtroom that he expected to see « some fabulous lawyering skills. » Prosecutor Christopher Darden led off the prosecution’s opening statement by portraying Simpson as an abusive husband and a jealous lover of Nicole Brown Simpson. Prosecutor Marcia Clark followed with a statement laying out the facts proving Simpson’s guilt that the prosecution would establish during the trial. 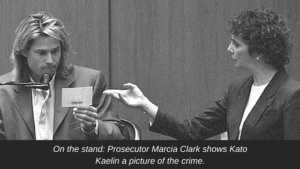 The first group of witnesses included relatives and friends of Nicole, friends of O. J., and a 9-1-1 dispatcher, all produced to demonstrate Simpson’s motive and his history of domestic abuse. Nicole’s sister, Denise Brown, described seeing O. J. at the dance recital of his daughter, Sydney, on the day of the murder. She testified that Simpson looked « scary, » like a « madman. »
The prosecution next produced a set of witnesses–including limousine driver Allan Park, Kato Kaelin, and officers of the LAPD–to establish a timeline of events that left Simpson with ample opportunity to commit murder.

Limo driver Allan Park proved to be one of the prosecution’s most effective witnesses. Park testified that he arrived at the Simpson home on Rockingham at 10:25 to pick O. J. up for his scheduled flight to Chicago. He said he rang the doorbell repeatedly, but received no answer. Shortly before 11:00, according to Park, a shadowy figure–black, tall, about 200 pounds, and wearing dark clothes– walked up the driveway and entered the house. A few minutes later, Simpson emerged, telling Park he had overslept. Park testified that as he entered the limo, he carried a small black bag (which the prosecution hoped the jury would conclude contained the murder weapon).Park testified that Simpson would not let him touch the bag. The bag has never been seen since.

Under California law, a double-murder conviction can warrant the death penalty. But most legal experts say, for a number of reasons, that if Mr. Simpson is convicted he may not be a strong candidate for capital punishment, which in California is by gas or lethal injection, with the choice given to the condemned person.
One reason, the experts say, is that Mr. Simpson does not have a long criminal record; another is that execution is generally not sought for the killing of a spouse.

Finally, the prosecution began to put forward witnesses directly tying Simpson to the two murders. The evidence was technical and circumstantial, relating mostly of the results of blood, hair, fiber, and footprint analysis from the Bundy crime scene and Simpson’s Rockingham home. The most compelling testimony–if one assumed the accuracy of the testing–concerned two RFLP tests. The first indicated that blood found at the crime scene could have come from only 1 out of 170 million sources of blood–and that O. J. Simpson fit the profile. On cross-examination of the prosecution’s DNA experts, the defense had little choice but to begin to develop the theory that either the blood samples were contaminated or they were planted by corrupt police officers.

The strategy of Simpson’s defense team, called the « Dream Team » in the media, was to undermine the prosecution’s evidence concerning motive, suggest Simpson was physically incapable of committing the crime, raise doubts about the prosecution’s timeline, and finally to suggest that the key physical evidence against Simpson was either contaminated or planted, or both.

The jury spent only three hours deliberating the case that had produced 150 witnesses over 133 days and had cost $15 million to try. As America watched at 10 a.m. PST on October 3, 1995, Ito’s clerk, Deidre Robertson, announced the jury’s verdict: « We the jury in the above entitled action find the defendant, Orenthal James Simpson, not guilty of the crime of murder. » Simpson sighed in relief, Cochran pumped his fist and slapped Simpson on the back. The Dream Team gathered in a victory huddle. From the audience came the searing moans of Kim Goldman, Ron’s sister, and the cry of his mother Patti Goldman, « Oh my God! Oh my God! »

No copyright infringement intended. This is an educational and non-commercial site.