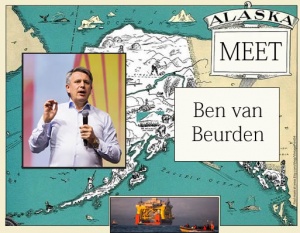 If Shell’s Chukchi Sea drilling operations (operations de forage) manage to penetrate underground rock formations in waters off Alaska’s north coast this season and don’t find oil (pétrole)that could be the end of the company’s controversial Arctic drillings, according to a report from the BBC.

“Our plan for the Arctic is to find out whether there is any oil in the Chukchi Sea,” Shell CEO (chief executive officer) Ben van Beurden told the BBC.

« We are in the middle of that drilling campaign and we have to see at the end of the season whether we get into the reservoir. If these results are conclusively no, then it will probably be the end of the road for our Alaska adventure.

« I think ultimately the world needs energy,” he said. “Fossil fuels (énergies fossiles) will have a role to play simply because there is not an alternative available in sufficient quantities within the timetable we are talking about.”

Oil and Gas has Been Good to Alaska, Providing Jobs and Revenue